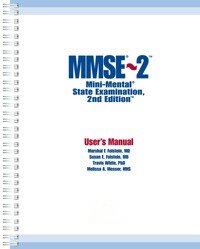 The MiMSE-2 is brief assessment of cognitive impairment. It retains the clinical utility and efficiency of the original MMSE, while expanding its...

The MiMSE-2 is brief assessment of cognitive impairment. It retains the clinical utility and efficiency of the original MMSE, while expanding its usefulness with milder forms of dementia, including subcortical dementia.

The MMSE-2 retains the clinical utility and efficiency of the original MMSE, while expanding its usefulness in populations with milder forms of dementia, including subcortical dementia. It can be used to:

Three Versions
MMSE-2SV—standard version demonstrates high equivalency with the original MMSE (10-15 minutes)
MMSE-2:BV—brief version for rapid assessment (5 minutes)
MMSE-2:EV—expanded version is slightly longer, and more sensitive to subcortical dementia, and changes associated with dementia (20 minutes)
Equivalent, alternate forms (Blue and Red) of each MMSE:2 versions decrease the possibility of practice effects. The Pocket Norms Guide has been updated to include norms for all three versions of the MMSE-2 by age and education level, and includes reliable change scores for facilitate serial testing with any MMSE version.

The meta-analysis of studies using the MMSE, that appeared in the original MMSE Clinical Guide, has been expanded to incorporate studies published between 2001 and 2009, and include effect sizes.

Standardization and Development
A new normative sample of more than 1,500 individuals was used to establish reliability, and the normal range of scores. A clinical sample consisting of patients with Alzheimer’s disease and patients with subcortical dementia was tested to establish validity. To aid in the determination of specific raw scores, the sensitivity, specificity, per cent correctly classified, Positive Predictive Power (PPP) and Negative Predictive Power (NPP) of a wide range of raw score cutoffs are presented in the User’s Manual for each version, by clinical group. In addition, raw score means and standard deviations, by age and education level, as well as age- and education-corrected T scores are provided. Reliable change scores, which provide a measure of the degree of reliable change that has occurred in a patient’s performance between administrations, are provided at three levels of statistical significance.

Reliability and Validity
Internal consistency ranged from .66 to .79 for the clinical sample. Test-retest reliability was calculated using generalizability (G) coefficients. Equivalency of the Blue and Red Forms was also examined using G coefficients, which were .96 for all three versions. Interrater reliability was high, ranging from .94 to .99.

Convergent validity of the MMSE-2 was examined in terms of its correlations with several tests that purport to measure specific aspects of cognitive functions, including the Wechsler Memor Scale–Third Edition Digit Span Forward and Digit Span Backward subtests, the Category Naming Test, the Boston Naming Test, The Trail Making Test, Judgment of Line Orientation, the Stroop Color and Word Test (Stoelting Cat. No. 30150), the Wechsler Adult Intelligence Scale–Revised Digit Symbol and Block Design subtests, and the Hopkins Verbal Learning Test–Revised (Stoelting Cat. No. 32657).