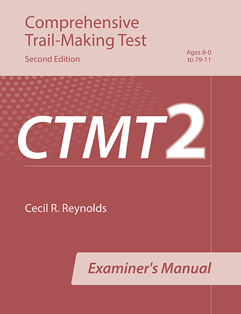 Updated extensively used test of attention, concentration, resistance to distraction, and cognitive flexibility for those with cognitive issues, us...

The CTMT2 is a standardized assessment that uses five visual search and sequencing tasks, called trails, that are heavily influenced by attention, concentration, resistance to distraction, and cognitive flexibility (or set-shifting). The basic task of the trails is to connect a series of stimuli (numbers, expressed as numerals or in word form, and letters) in a specified order as quickly as possible.

The test’s primary uses include the evaluation and diagnosis of brain injury and other forms of central nervous system compromise. Other purposes include detection of frontal lobe deficits; problems with psychomotor speed, visual search and sequencing, and attention; and impairments in set shifting. Neuropsychologists; clinical, counseling, school, and pediatric psychologists; occupational therapists; speech and language professionals; physical therapists; and others interested in objective testing of functionality in brain–behavior relationships would benefit from using the CTMT2.