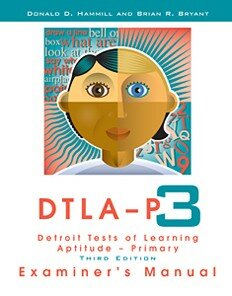 The Detroit Test of Learning Aptitude- Primary: Third Edition (DTLA-P:3) is a quick, easily administered test for measuring the general aptitude of young children. It is particularly useful with low-functioning school-age children ages 3-0 through 9-11. It is comprised of six subtests, measuring cognitive ability in areas such as language, attention, and motor abilities. Significant improvements over the previous editions have been made.