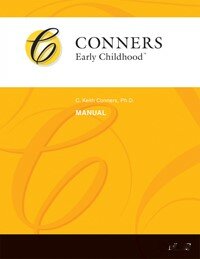 Conners Early Childhood is an innovative assessment for the early identification of behavioral, social and emotional problems in young children. ...

Conners Early Childhood is an innovative assessment for the early identification of behavioral, social and emotional problems in young children. EXCELLENT COMPANION to the AUTISM SPECTRUM RATING SCALES (ASRS).

EXCELLENT COMPANION to the AUTISM SPECTRUM RATING SCALES (ASRS)
ORDER BY AUGUST 1, AND SAVE $100!
An innovative assessment for the early identification of behavioral, social and emotional
problems in young children.

Child psychologists, clinicians, pediatricians and child psychiatrists can rely on the Conners Early Childhood to identify when early intervention is required. In addition to early identification of behavioral, social and emotional problems, the Conners Early Childhood also measures whether or not the child is meeting major developmental milestones (Adaptive Skills, Communication, Motor Skills, Play and Pre-Academic/Cognitive).

This multi-informant (parent and teacher/childcare provider) assessment allows for easy comparison across raters. It has clear and direct links to the Individuals with Disabilities Education Improvement Act 2004 (IDEA 2004).

Conners Early Childhood Report Forms
Parent–191 items    Teacher–187 items
Used in initial evaluations, these Forms can also be used for follow-up evaluation and treatment monitoring.  They include all of the items from the Behavior Scales, Developmental Milestones Scales, Other Clinical Indicators and Additional Questions. Parent Forms and Teacher/Childcare Provider Forms are available.

Conners Early Childhood Behavior Forms
Parent–115 items  Teacher–116 items
These forms are useful when there are concerns regarding a child’s behavior only, and all other developmental milestones are appropriately met.  They are appropriate for initial evaluations, but can also be used to monitor progress.  These forms include all of the Behavior Scale Items, Other Clinical Indicators, Conners Early Childhood Global Index, Validity Scales, Impairment Items and Additional Questions.

Conners Early Childhood Behavior Short Forms
Parent–49 items  Teacher–49 items
These forms are useful when administration of the full-length Behavior version is not possible, or practical, due to limited time, or when multiple administrations over time are desired. In addition to the short ( 49 item) subset of Behavior items, these forms include the Positive Impression and Negative Impression Validity Scales, and Additional Questions.

Conners Early Childhood Global Index
Parent–10 items Teacher–10 items
This is a quick and effective measure of general psychopathology, and provides a helpful tool for monitoring treatment and intervention. Each form contains the 10 highest-loading items from the original Conners Parent and Teacher Rating Scales.

REPORTS
Assessment Reports contain information about the child’s score, comparison to other children, which scales are elevated, and whether developmental milestones have been met.  A Feedback Handout presents results from the Conners Early Childhood Forms, and summarizes and describes scores in broad, non-threatening terms that are appropriate for a general audience.

Progress Reports compare the results of two to four administrations, for the same individual, to measure changes over time.  Ideal for monitoring treatment and intervention.

Comparative Reports compare ratings from two to five administrations from different raters (mother, father, teacher/childcare provider) to establish similarities and differences in reports of a child’s functioning within different contexts.

The data collected during the normative study allowed for a thorough evaluation of the psychometric properties of all versions of the assessment tools.

The Conners Early Childhood Scoring Software Kit includes unlimited-use Scoring Software, 25 each of all Parent and Teacher Response Booklets and a Manual. Booklets are sold in packages of 25. The Conners Early Childhood Global Index Kit is hand scored, and includes 25 each of the Parent and Teacher Global Index QuikScore Forms, and a Manual.